Each country’s cuisine taste is strongly influenced by its ingredients and seasoning. This is particularly true for the flavours of the Korean cuisine. The balance of ingredients and condiments and their combination define the peculiar taste of Korean food. For these reasons I think would be a good idea to give more insights about  some of these ingredients.
I will start today by talking about three of them: Rice, soy sauce and chilli pepper powder that in my opinion are some of the key ingredients of Korean cuisine together with soybean paste (doenjang) and chilli paste (gochujang).

Rice 쌀 (Ssal) – Since the first time I came to Korea I realized how the rice plays an important role in the Korean diet as much as wheat in Mediterranean diet. If in Italy wheat products such as pasta and bread are the keys components of the majority of the meals, rice for Koreans has the same importance. Rice and rice flour are used to create many dishes, from main dishes to desserts. The white rice usually eaten in Korea is medium grain similar to the one used in Japan. 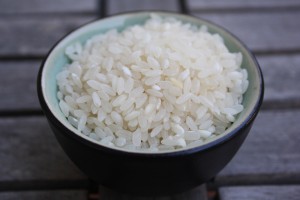 In the past, when rice was still something that only rich people could afford, the lower class people used to cook it adding other grains or beans to it. This had two intentions: firstly to add to the meal more nutrition and secondly to extend their stock of rice. This habit has survived till modern times, and it is quite common to cook rice at home together with other grains. Also in restaurants you can be served mixed rice upon request.

Alongside the white rice, other varieties are quite common and are used either in place of the white rice or mixed to it. In Korea also brown rice and black rice are available. Both this varieties have high nutritional value and require longer cooking times than the white rice.

Soy Sauce 간 장 (ganjang) – In Europe usually when we think about soy sauce we connect it only to Japanese sushi, when it used for dipping but, as I have discovered recently, in Korea there are different kinds of soy sauce that differentiates for the colour, the taste, the saltiness, the way they are produced and for the dishes they are used in. We can divide then soy sauce in Jaeraesik ganjang (재래식 간장) – soy sauce home made produced following traditional way and Gaeryangsik ganjang (개량식 간장) – produced in industrialized way.

The traditional home made Korea soy sauce it is also called Joseon ganjang – 조선 간장 named after the Joseon dinasty that ruled in Korea for almost five centuries. It was traditionally prepared by using only cooked soybeans and salted water. The mixture then was left for 3  months (according to the taste and for what it was intended for) outside the house during winter. This is the reason why different families had their own soy sauce with their preferred taste. The Joseon ganjang can be further divided according to the time of fermentation in fresh soy sauce Chonjang – (청장) fermented for less than a year, middle dark soy sauce Jonganjang (중간장) that is fermented for 3-4 years  and soy sauce that has fermented for more than 5 years, dark soy sauce Jinganjang (진간장).  The middle dark soy sauce is also called Gukganjang (국간장) and as the name suggests, this soy sauce is used to prepare soups (guk – 국) but also in the preparation of vegetables as side dishes. 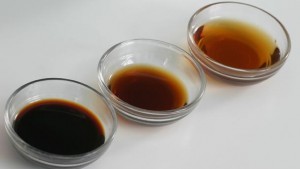 The 개량식 간장 is produced in industrialized way and was introduced in Korea from Japan during the Japanese occupation. The colonial period introduced different manufacturing processes that were not used in Korea before and this affected the production of soy sauce as it was meant as mass production for the Japanese soldiers. Nowadays many people use this soy sauce without really knowing its origin and it is interesting to notice how the influence of the Japanese colonization has changed the taste of a population even after such a long time.

This soy sauce can be divided in Yangjoganjang (양조간장) and Jinganjang (진간장) and they differ from the process of production and in their ingredients. The Yangjoganjang is prepared by using soy beans and wheat and it is of a better quality than the second kind. Jinganjang in fact is a mixture of the Yangjoganjang and some chemicals (like taste enhancer and conservatives). The colour of the standard soy sauce is darker than the Korean traditionally soy sauce and it has a sweeter taste and it used mostly for marinating (as in bulkogi), for grilling and dipping.

Chilli pepper powder 고추가루 (gochugaru) – Chilli peppers have quite a short history in Korea since they were introduced only in the 17th century but they quickly became a key ingredients of the Korean cuisine.  Gochu (고추) means chilli pepper and garu (가루) means powder. 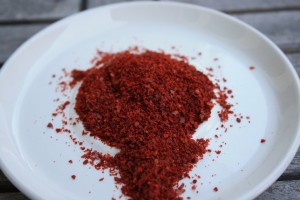 Traditionally this powder was prepared using ripe chilli pepper that were dried by sunlight and then made into powder. Nowadays you can find packed chilli powder everywhere and very few people prepare it at home. There are several kind of gochugaru that differentiates for the spiciness according to the chilli peppers that were used. Chilli peppers powder is now used in many dishes as for example kimchi, tteokbokki as well as stews and soups.