Korean cuisine origins can be traced back to more than 2000 years ago and during this time has been evolving together with both cultural and social development of the country. This cuisine, although still not as popular as Japanese or Chinese ones, is becoming to grow in popularity thanks to its richness in flavour and healthy ingredients that makes it unique.

Generally Korean meals consist of 3 parts: Steamed Rice(밥 – bap), soup(국 – guk) and various side dished(반찬 – banchan). For the 밥, they use not only rice but also many other grains like brown rice, barley, millet, sorghum and occasionally mix some beans, corns and chest nuts. The soup has two main variations:  the first one is 국 which is watery soup and sometimes can be called 탕 (ttang). The other one is 찌개 (jjigae). 찌개 is more likely a stew. Less watery and with more strong taste. Usually when you have 찌개 during the meal they serve one big pot in the middle of the people and people share that 찌개 altogether. 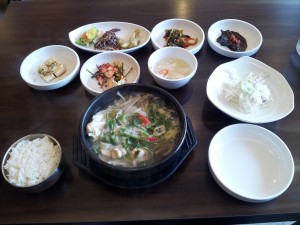 In Korean cuisine there is an almost infinite variation of side dishes. The most typical side dish is Kimchi(김치). It is fermented vegetable(generally asian cabbage but also with radish, cucumber, chive and so on) with red chilli pepper powder(고추가루 – gochugaru) and salted and fermented fish(젓갈 – chotgal). And you can try every vegetables and meats and fishes in side dishes. Commonly used seasoning ingredients are 고추가루(red chili pepper powder), 고추장(red chili pepper paste), 참기름(sesame oil), 간장(soy sauce – ganjang) and 된장(bean paste – dwenjang). Specially 고추장, 간장 and 된장 are all fermented food so they say it’s good for health. In Korean cuisine red chili pepper is used almost everywhere (specially in 김치) but it is not traditional ingredient since it was introduced in Korea only 500 years ago.

There are some aromatic herbs that Korean people use often in their dishes. One of the most common is 깻잎(sesame leaf) and it has really unique scent. And also there are some typical herbs like 산초, 방아, 고수 and 쑥갓.

Talking about the cooking method, we usually boil and steam or grill. Traditionally frying method is used only for few dishes  but nowadays it is changing due to the influence of western and chinese cousine.