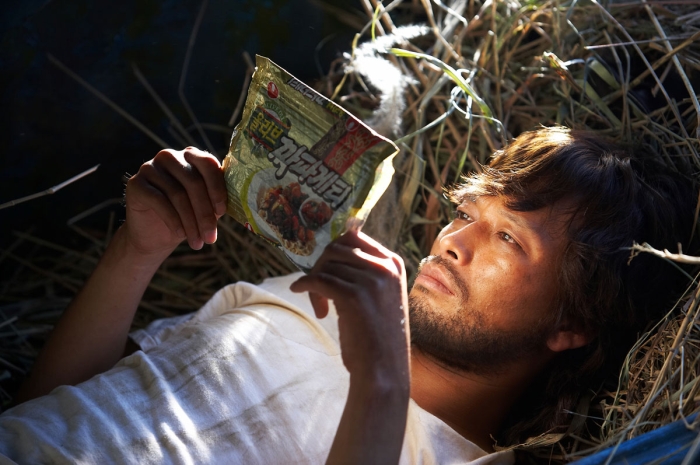 When it comes to take away or home delivery food each country has their own favourite dishes. Although nowadays you can order almost any kind of food anywhere, there are few dishes that are very popular in each country. As an example, for an Italian from Napoli as I am,  the perfect home delivery food would be a pizza delivered to your home straight out of the stone oven.

In Korea some of the most favourite foods for home delivery come originally from China and have been adopted from Koreans as their own. These dishes include Jjajangmyeon, Jjampong and Mapo tofu.

Today we will focus on the first two: Jjajangmyeon and Jjampong.

Jjajangmyeon – 짜장면 (blackbean noodles) is one of the most popular dishes in South Korea. It consists of wheat noodles served with a black and sweet sauce called chunjang, made from roasted soybean, thickened with cornstarch and sweetened with caramel. The sauce canbe prepared in many ways: the vegetarian version is prepared with carrots, cucumber, courgettes, onion and other vegetables while the non-vegetarian version also include pork, beef or seafood like squid and shrimps but not fish. The taste is very rich and the contrast of flavours is enjoyable. The thickness of sauce (due to the starch) are a perfect match for the chewy noodles. Pickled radish and raw onion are the selective side dishes for jjajangmyeon and are meant to refresh your palate. 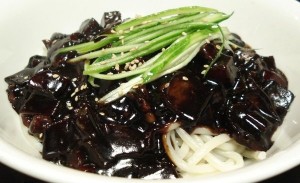 The origin of this dish are from China, but there are many differences. The Chinese version is more simple, including  usually just pork, bean paste and sliced cucumber and the sauce is salty. After Jjajangmyeon was introduced to Korea, it was modified according to Korean taste and it was served for special occasions like weddings or birthdays. Things have changed in the last 30 years and it has become a casual dish. You can find many Jjangmyeon shops all over Korea and it can be ordered and delivered at home. After ordered it you will receive it within 30 minutes and after have consumed it, you can leave the bowl and cutlery outside of your step door for the delivery guy to take it back. Of course Jjajangmyeon is also available in instant packet in every convenience store.

Jjajangmyeon has become an icon of Korean food culture as much as kimchi and people enjoy during their every day life. It has also been featured and celebrated in TV shows, songs and movies! An old song refers to Jjajangmyeon as one of boy’s memory about his mother: G.O.D. To my Mother

One of the latest Korean movies I have watched “Castway on the Moon”, include scenes where Jjajangmyeon is the object of desire of the island-castaway main character. 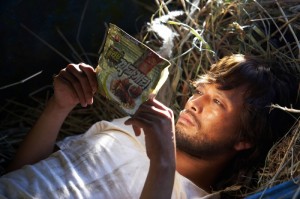 Jjampong – 짬뽕 it’s a dish that was originally created in China but that has been adapted in Korea and that has become a very popular dish as much as jjajangmyeon . As Jjajangmyeon, it is reasonably chap and filling, making it a perfect meal for students. It is usually served in Chinese restaurants in Korea as well as take away and the funny thing is that if you are outside Korea, you will find this dish mostly in Korean restaurants and not in Chinese ones.

Jjampong consists in a stew of seafood such as shrimps, octopus or sea shells cooked together with vegetables and served with wheat noodles. Vegetables include green onion, carrots, ginger, cabbage and mushrooms. The peculiar thing about this dish is that the recipe is very flexible and the ingredients can change a lot according to their availability and to the country and it can also include meat. When I was in Canada, I tried a Jjampong prepared using squids, shrimps, octopus and clams as seafood and sliced pork as meat. The vegetables used were mushrooms, spinach, onion, green peppers and carrots. The spiciness to the dish was given by the red pepper flakes added. 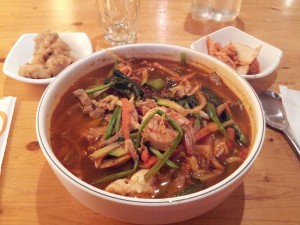 Which of the two dishes have you tried and which one do you prefer?
If you have never tried Jjajangmyeon or Jjampong, I strongly suggest to try both dishes if you are in Korea, enjoying them preferably with friends at home, after ordering them on the phone of course ;).