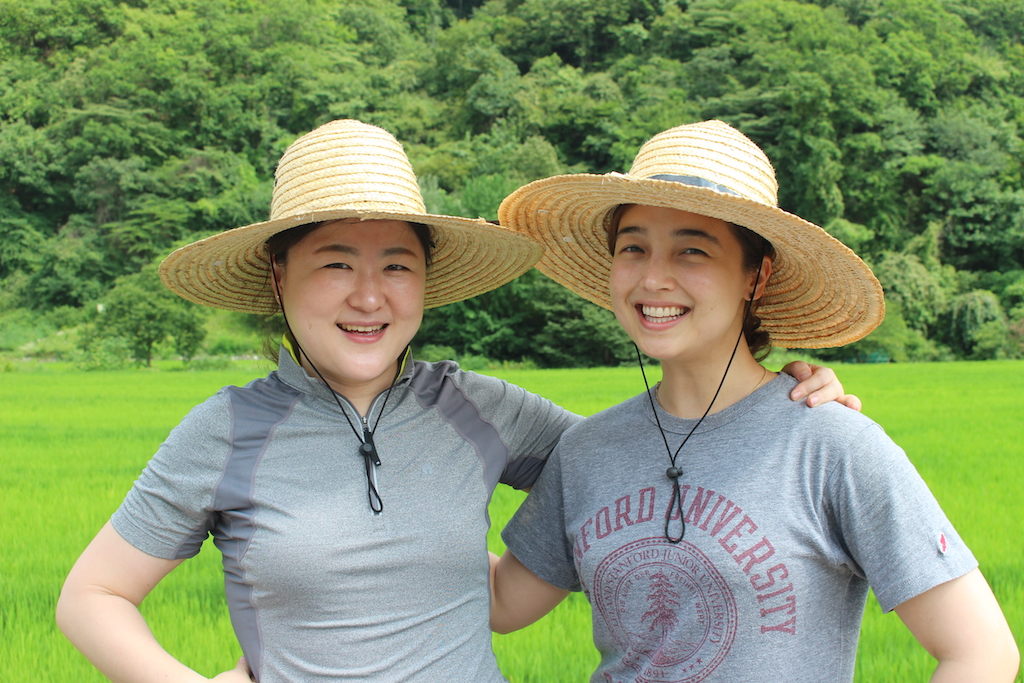 During my last trip to Korea I had the pleasure to meet the minds behind bburi kitchen project. Seoyoung and Sonja started this project a bit more than a year ago, traveling across Korea to re-discover seasonal and local ingredients of Korean food. An incredible journey that gave them the chance to learn a lot about tradition and history of Korean cuisine. Want to know more about Korean food and its ingredients? visit their blog!

How this project started? When did you start this project? How did you start being interested in food? How did the idea of thee project came to you and decided to work together (having different backgrounds) and how you collaborate on the project?

Seoyoung  I used to work in NYC for a French cuisine restaurant and I found a job in one of the major Korean food companies in Korea and worked for them for about five years. It was a great experience and I learned a lot about Korean cuisine but eventually the focus of the company should be promoting their products since it is a corporate rather than Korean food as original. This was a bit limiting since as a chef you always want to experiment and look for new ingredients. Learning about Korean cuisine from the company was great first step for this project.

Sonja I am half Korean and before moving to Korea all I knew about Korean food was thanks to my mom and the food she prepared at home or from Korean restaurants in the U.S. Once arrived here, I realized that there was so much more to learn about Korean food and the amount of Korean food and ingredients available back in the States is very limited, just a fraction of what actually is. I also noticed that people new in Korea like me and other expats, tended to gravitated towards imported ingredients we knew in the grocery store like broccoli, bell peppers and so on. I thought “that’s a shame, it would be nice to buy more local ingredients and know how to use them in the kitchen.”

During the same period, Seoyoung was having a cooking class at her studio and I joined the class. It was such a good class! She explained all the ingredients and how to use them, not only asian ingredients but also western ones. It so much fun! Later she found out I am a freelance writer (also about Korean food and culture) then she asked me “Do you want to do something crazy with me? Do you want to travel across Korean countryside for a year to explore seasonal ingredients and write about it?” and I said “Yes, let’s do it!”.

Seoyoung Our first trip was in January 2015, the project is now lasting for over a year now. Sonja quit her job 5 months before me, so at the beginning we were traveling over the weekend – taking a night bus on Friday night, working on our project and then coming back on Sunday to Seoul. It was exhausting! So I decided to dedicate to it completely as well and quit my full time job.

Sonja Initially we thought the project would last only one year but now we realize that is maybe a two or three years project!

Seoyoung Yes, it’s not easy! the more you learn about Korean food, and go deep into it, the more there are things to learn and to write about. It’s so much fun and exciting! Sometimes it’s also hard because we don’t have any sponsor but people appreciate what we are doing. There are many people  who want to learn more about Korean food ingredients, and they come to us for that.

Sonja One of the key reasons of our travel is that we wanted to meet the actual farmers and talk to them. They have so much knowledge about ingredients, and we wanted to share this information. There is so much material in Korean but in English is still limited.

How did you find this farmers and approach them?

Seoyoung We sometimes use our network or mostly we research before we approaching them.

One of the things I find more interesting about Korean food is that traditionally they use a lot of vegetables, wild herbs and roots. I think it’s very distinctive of Korean cuisine.

Seoyoung Yes, if you go deeper in the Korean food history and culture you would be surprised from how many ingredients are for wild and foraging. This was one of the things we wanted to promote. Most of Western country know Korean food for bulgogi or bibimbap, but Korean food culture is very ancient and uses a lot of ingredients from wild and foraging. Not so long ago Korea was a poor country and finding and using these ingredients from wild was a necessity. Our ancestors were very wise to use what the nature offered and they had knowledge on how to use this wild ingredients to survive hunger.

For example even fernbrake (gosari 고사리) contains poison and older generation knew how to prepare it to get rid of the poison and eat it safely. So there is a lot of knowledge and that is what makes Korean food interesting,  rather than focusing on presentation of dishes.

We are careful when using the word “traditional” for Korean food and we are trying to focus on what older generation used to eat and show the more simple and humble side of Korean food. But these days Korea food culture is changing rapidly and people is eating a lot of fast food and is replacing traditional Korean cuisine

Sonja We have a lot of discussions about the meaning of the word “authentic” when talking about Korean food. Nowadays also spicy fried chicken can be called authentic Korean food, but we are trying to go back and see what is being lost and trying to keep it alive.

Seoyoung Even the spicy taste in Korean food is changing. Our traditional spicy sauce, gochujang, is a sauce that requires a lot of time and labor. Therefore, the value and price is going up and a lot of restaurants are changing their sauce to a spicy sauce that can reduce costs but shows only a very powerful spiciness compared to the natural sweet and deep spiciness of gochujang.

Sonja Same for sweetness. In many places, Korean food is becoming more and more sweet because restaurants are using a lot of sugar. My mom always comments on this whenever she visits Korea.

Regarding your creative process, how do you come up with recipes? Your recipes are mostly vegetarian, and they reminded me also Korean temple food, that uses also vegetables, wild herbs, fruits.

Seoyoung I create the recipes based on what daily Koreans eat with the ingredients. We select the most common way to eat the ingredients and it is based on my experience including my mother’s recipe (a lot!) and all the other trainings that I have received about Korean cuisine. Bburi wants to show the basic, daily humble Korean table to show you. But after introducing recipes based on the everyday, common Korean way of eating, we are hoping to show to show another side of Korean recipes with some twists—maybe a Bburi Kitchen v.2? Keep an eye out for it!

And also for the mountain wild vegetables, yes, one of the reasons is because a good part of our country has mountains, so there are many wild herbs and trees to use. Relatively there has been less flat grasslands to raise animals and specifically beef has been considered a very expensive ingredient. It was considered as one of the privileges that royal people and only wealthy people could afford back in the day. So there are many recipes using beef if you look at Korean royal cuisine recipes.

Sonja Of course there are a lot of meat dishes in the modern Korean cuisine: bulgogi and so on. We are modern people and we eat meat, but in our project we like to show that there is also so much more than the dishes that everybody knows.

Is there a favorite ingredients you like to use in your recipes?

Seoyoung In general I like wild vegetables a lot. Maybe young people don’t appreciate them but as you grow older you really start understanding how many of these help many process in your body, like digestion.

Sonja I don’t really have only one ingredient, but one that I love in particular is ggaennip (깻잎 sesame leaves). To me this ingredient is so essentially Korean.

Also, we have another favorite ingredient, naengi  (냉이 Shepherd’s Purse) and we even have it as our logo! This wild herb comes in the spring and we usually eat the root along with the leaves.

What are your future plans? Are you involved in other activities?

Sonja We have a radio show once a week during which we talk about seasonal ingredients. We are hoping to write a book based on the blog as well.