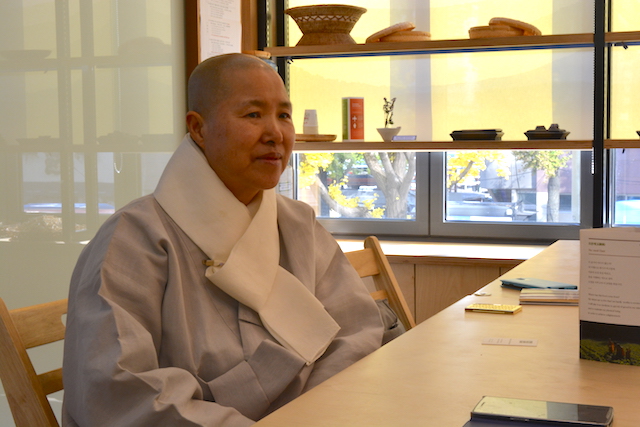 We met Ven. Sun Jae before her trip to Italy at the Korean temple food center in Seoul.

How your interest on food started? And when?

I left home and entered the Buddhist priesthood 37 years ago at the Sinheung Temple in Hwaseong (Gyeonggi Province). In temples we can only eat temple food. The core spirit of Buddhism that are ‘mercy’ and ‘wisdom’ are also represented in the temple food.

The specialities of temple food is that there is no any meat included and that also five vegetables with pungent flavours are avoided (onion, garlic, chive, green onions and leek).

There are many teachings in Buddhism what is relevant to food, but two of the main teachings are:

No matter what kind of life it is, as buddhist monk, we relate to all lives and their pain. For example, if the field was polluted, the plants growing on the field will be polluted as well.  People who eat those plants get sick. As you can see we all share so we all share the same pain and damage. And as humans, we are only a small part in the chain of ‘one’.

Another example: chickens that were injected with hormones in order to make them grow fast and produce more meat. When people eat their meat with the chemicals, their body will be affected.

Thus, we should only take what we really need from the nature rather than taking as much as we can or we want. Just like the bees take the nectars from the flowers, they take but they don’t hurt the flowers. The reason why we don’t eat the five pungent flavours is because they effect emotions. And in order to have clear spirit you must avoid these.

As a Buddhist priest, I think we must follow these teachings and practice. It is the way to communicate with the whole world. Me and the other monks, however, never actively mentioned our dietary routine outside the Buddhist priesthood, because it is just a very natural and normal thing we do.

Eight years ago, during a trip to Italy, I got to know the Slow Food movement and I was surprised to see how their principles are very similar to the ones of the Korean buddhism when it comes to food.

After becoming a Buddhist nun, I have introduced some teenage criminals to meditation and helped them change their dietary routine. Through this experience, I saw the changes on their behaviours, and people started to be curious and wanting to learn about the power of food. They realised temple food is not exclusively eaten in the temples but this food routine can be brought to people’s lives.

Thus, I started doing more researches and writing essays about temple food. While looking after the teenage criminals, it was a hard time for me because I needed to be with them 24 hours in a day, to make sure they do not seek for drugs or commit crimes.

Eventually, irregular working hours and unhealthy food and life routine affected my physical condition, especially my liver function. It took me one year to recover and finish the treatment. During the treatment, once again, I experienced and learned how food affects our physical and mental health. After I recovered, I started giving lectures and teaching about healthy dietary routines on TV. In the beginning, the older monks worried about my public appearance, but as more and more people get to know about temple food and switch to a healthier eating routine, they are glad to see the changes.

I think the main concern is not do decide to eat or not to eat meat, more important concern is where the food ingredient was from and how it was grown. The food ingredient from the good nature can help us connect with the land, and help us realize more clearly that all lives are equal. In order to produce good food ingredients, we need to educate people to respect nature and create a more natural environment.

To experience temple food, It doesn’t really have to be in the temples or in Korea, you can also make and eat temple food in Italy, because the concept of temple food is the choose food that suits your body.

The main concept of Buddhist food culture is that we regards food as the medium that connects human and nature. Food has lives just as human beings, when we eat good food, it produces positive reactions to our body. Just like making friends, when we get to know people who have positive minds, they affect us positively. On the other hand, people who have negative thoughts or a weak spirit that also affect our minds and weaken our energy.

In the last few years you have been travelling a lot in Europe to promote Korean temple food. How people approached it?

Many people in Europe seem to be very interested in temple food or pursuing a more natural and healthier dietary routine. I mainly visit Italy once in a year, so I visited last year, and in the last 3 years I also have been to Paris and gave lectures there. People in these countries seem to take temple food as a new dietary concept and open to accept it.

I think most people there did not know much about temple food but they are willing to learn about it. I heard some people had been waiting for my lectures for years, and over 5,000 people joined my lectures. Moreover, I realised that many adults get sick easily after eating unhealthy food for a long time, so the education of respecting nature and healthy dietary routine should be taught to people in their early ages. Some of the projects we produced, an educational musical and a school tour, were made to educate young students in eating healthy.

But to learn about temple food, I think it is necessary to know and gain more ‘wisdom’ and ‘mercy’, so that we get to know how to treat our nature and all the livings in a proper way. 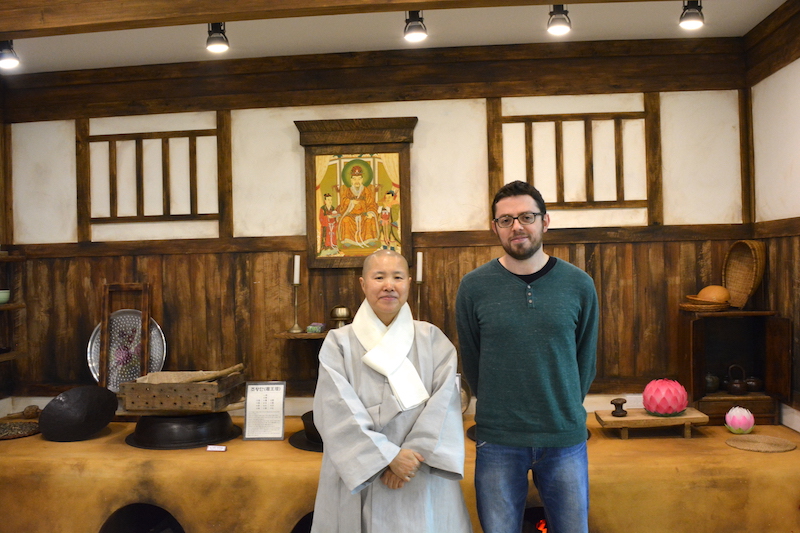