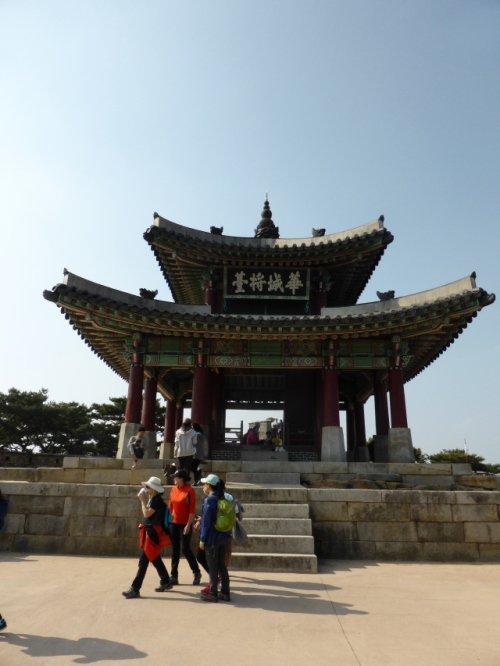 A day trip to Suwon

It was a sunny Sunday and I needed to get out of the hectic Seoul so I decided to do a day  trip to a place I haven’t visited yet.

The city of Suwon is located around 30 km south of Seoul and knowing that it has many interesting sites to visit, it sounded like a good option.

I got on board of the metro line 1 and arrived at Suwon central station after a 45 minutes ride from my house near Ehwa station in Seoul.

One of the most famous buildings in Suwon  is the Hwaseong Fortress that was nominated UNESCO World Cultural Heritage Site in 1997. After arriving to the Suwon station I went straight to visit the fortress. I got on the bus  number 36 and it dropped me at the entrance of the fortress after a 10 min ride. The entrance fee to the fortress is 1000 won for adults, 700 for youth and 500 for kids and elder.

Hwaseong Fortress  was originally built from 1794 to 1796 during the Joseon Dynasty (1392-1910). The Fortress had a magnificent look, with its walls running up the hills around the city, and after purchasing the ticket, I started going up from the Paldalmun gate (south gate). The wall runs for about 5 km around the fortress, from flat areas to the hills around Suwon and within its perimeter are included many buildings such as Haenggung palace and King Jeongjo’s bronze statue. Weather is warm and sunny, the walk is very enjoyable and not too challenging since the walking paths are not too steep. As usual, when visiting historical sites in Korea, many people are there and except some foreign visitors, a good part of them are Koreans. I appreciate the fact that people in Korea are generally interested in their cultural heritage and they visit historical sites or museums whenever they have the chance. It is a tendency that is disappearing in some countries, including my home country, where a lot of cultural sites have to be closed down due to lack of visitors, investments or are severely damaged because of poor maintenance.

On the top of mount Paldamun hill there is the Hyowon’s Bell, a bell that was created in order to honor King Jeongjo’s father. The bell ( three rings 1,000 won for person) has to be rung three times: the first ring is in gratitude for one’s parents, the second  to wish happiness in one’s family, and the third to wish your self improvement.

Continuing our walk on the fortress’ wall, we cross many turrets, pavilions and command posts. These are wooden and stone buildings that were used with defensive purposes as well as for resting and meeting point of soldiers and their superiors. The turrets overlook the valley around the hills, and that made easy to spot an enemy approaching for a very long distance. Looking from the top of the hills towards the inner part of the fortress, the view is amazing, and is easy to distinguish the Haenggung palace. 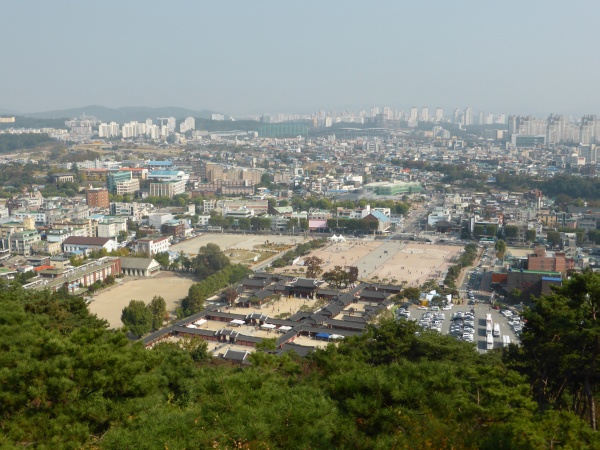 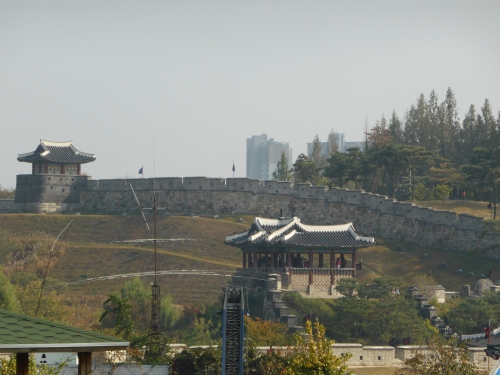 The most impressive parts of the fortification are the four gates (Hwaseomun, Janganmun, Changnyongmun and Hwahongmun). The Hwaseomun is the first you will encounter while walking from the Paldamun entrance, and it has been selected as National Treasure No. 403. Its shape appereance is peculiar, having it’s external side open in a semi circular shape. Same shape but bigger size and largest of Korea, is the Janganmun Gate (North gate). Jangan means capital, and many people believe that this name reflects king Jeongjo’s intention to move the capital from Seoul to Suwon.

After enjoying the performance and clapped my hands for them, I kept walking until reaching the Hwahongmun Gate. This gate is peculiar because water gates are installed at the bottom of it. Water flows trough them pouring into the stream that runs within fortress boundaries. 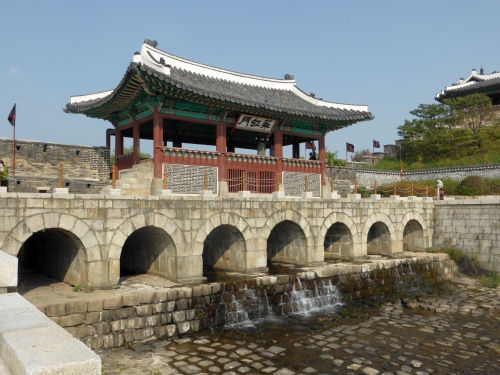 It was time for lunch then, and I decide to walk on the street that runs along the stream. This street is filled with small restaurants, handcrafts and art shops as well as coffee shops.

Suwon is famous for its beef ribs dishes (소갈비 – sogalbi) so I wanted to try them so I entered a small restaurant just across the Haenggung palace. Since it was a Sunday, many of the other restaurants were closed so it was kind one of my few options, but as I soon realized, the place was filled with locals, so I was a bit reassured that it would have been a good meal.

I ordered  소갈비찜 (sogalbijjim – beef rib stew) and while waiting for my food, I had time to check the schedule for the martial art performance that would take place in the afternoon. 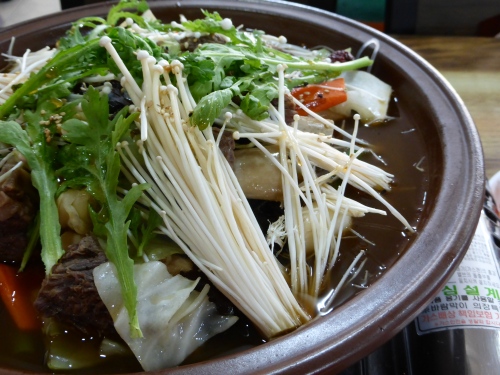 The stew arrived after few minutes, and even if it was a single serving, it was huge! It was served and slowly cooking on the burner, while the two sides dishes were cabbage and radish kimchi.

The appearance was fantastic and the dish included many ingredients: beef ribs, rice cakes, glass noodles, cabbage, jujube, carrot, mogi mushrooms (tree-ear mushrooms) cooked in a soy sauce-based broth. The meat was left cooking for a few minutes before I started to eat the dish. The flavor was very deep and the meat was tender, melting in your mouth. I was particularly surprised by the taste of the mogi mushrooms. It was the first time I tried that kind of mushrooms, and although the consistence was spongy, I liked the delicate taste.

The stew was very filling and I could not finish the dish! I asked the waitress to bring the rest at home (포장 – pojanghe) and headed to the main entrance of Haenggung palace where the martial art performance would take place. 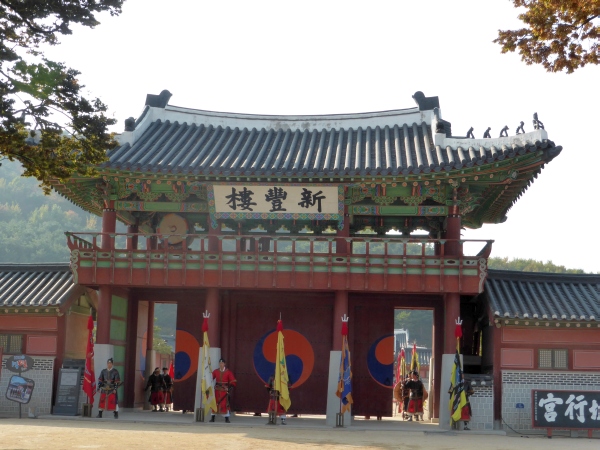 There were already a lot of people waiting and the show started on time! Being interested in martial arts myself, I wanted to know which kind of martial arts and weapons were used back in Joseon Dinasty.

The artists were amazing and used confidently several weapons: swords, spears, sticks, arrows and bows. Also the hand to hand combat was interesting, mixing Korean traditional martial art techniques with some imported from the China.

It was impressive and I captured a clip of the beginning of performance.

After about 40 minutes the show was over and many people took pictures together with the martial artists and their weapons.

For me was time to head back to Seoul, having an appointment in the afternoon and while on my way to the train station, I felt very happy of having visited Suwon. It is a perfect place to get away from the hectic capital, and in Suwon you can find history, culture, delicious food and friendly people. What else can we ask from a short escape like this one?

I have already planned to come back again to visit the Folk village and maybe enjoying the martial art performance again.

Suwon can be reached from Seoul by metro (line n. 1) or by bus n. 3000 from Gangnam station. The trip takes approximately 40 min.

From the right side of the Suwon train station, you can take bus number 11, 13, 36, or 39  that will drop at the entrance of the fortress after a 10 min ride (Paldalmun gate stop).

Once arrived at the Suwon train station, go trough exit 4 and reach the Tourism information center. There you can purchase tickets for the Folk Village and with that ticket, you can get on the free shuttle bus departing every 30 mins from there.