Today I want to talk about the kind of food that is served at home in Korea. All of us have experienced home food from our countries and we know how special this is and how it brings up memories while eating it.

My temporary Korean flatmate (Thank you Yu!) was so kind to cook for us a delicious lunch including some of the most common home cooking dishes. It was great to have such a good chef in our kitchen and we enjoyed helping her cooking.

The first dish we prepared was bibimbap. This is probably one of the most popular dishes and it has nowadays become a representative dish of Korea cuisine. This version included steamed rice (of course), onion, stir fried carrots, cucumber, mushrooms, kimchi and beef,  topped with fried eggs. We also prepared the sauce for the bibimbap by mixing sesame oil (참기름) and chilli pepper paste (고추장). Since it is a home cooking version, the bibimbap  was served in a big metal bowl from where we could all dig our spoon and take a portion.

This is a different way of consuming bibimbap that comes from the countryside tradition: the women would cook the bibimbap in these big bowls and carrying  them on their head to bring them out in the fields  were the men were working. This particular way of serving bibimbap is called yanpun bibimpab – 양푼 비빕밥  (양푼  is the name of the metal bowl)

The second dish was Teokbokki. Who has visited Korea or knows something about Korean food, would definitely have heard about this dish. Tteokbokki stands can be found everywhere in Korea where is consumed as street food. But Korean families often cook it at home as well. The ingredients are rice cakes, fish cakes, vegetables (like spring onions, onions and garlic) and using as sauce the chilli pepper paste. If you buy Tteokbokki from a street vendor in Korea it will be probably very spicy, but since we were cooking it at home, we could adjust the spiciness to our western taste (I am sure for Yu it was quite mild eheh). I have tried tteokbokki before and the one prepared by Yu has been one of the best I have ever tasted, also because she put a personal touch to it by adding a couple of spoons of  curry. This version of Tteokbokki has become my personal favourite!

Last but not least we cooked Hobak jeon (pan fried zucchini) and donggeurang ttaeng (meatballs).
We prepared the pan fried zucchini coating them with wheat flour and egg batter. We used a particular flour from Korea who makes the zucchini very crispy and doesn’t adsorb too much fat from the oil ( a bit like the Japanese tempura) 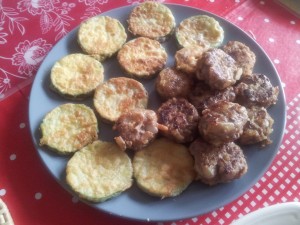 The word ‘donggeurang ttaeng’ are small round shaped meatballs prepared with ground beef meat, onion, garlic and carrots. After mixing all the ingredients the meatballs were coated with wheat and egg batter as Hobak jeon and finally frying them. The dipping sauce was prepared with soy sauce and apple vinegar.

The last two dishes are not only cooked at home but are also often consumed as appetizer or side dishes. Additionally they are also part of the ceremonial table setting, a set of dishes and drinks that are cooked for the ceremony for the worshiping the ancestors (part of the traditional Korean ceremonies). We will talk about the ceremonial food in another article!

To sum up, preparing all this dishes was a lot of fun, and as I was helping Yu cooking, I learned a lot about ingredients and preparations of the food. A special thank also to HyunJu who explained me a bit of the background of these dishes. Can’t wait to go to Korea to put my skills to the test and attend some cooking classes.