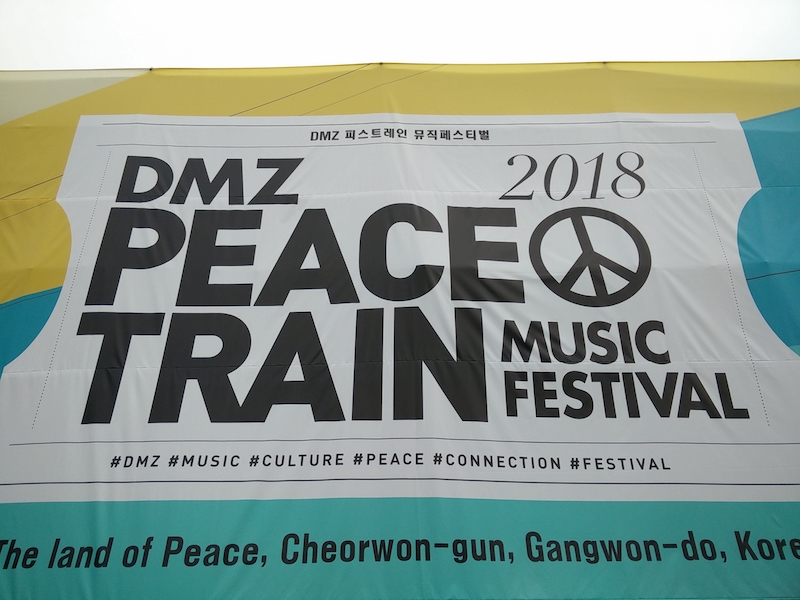 The first edition of DMZ Peace Train Festival took place from the 21st to the 24th of June, with an opening event in Platform Changdon 61 in Seoul and continued for two days in symbolic and historical locations in the Cheorwon county. During the festival 34 artists from 7 different countries performed on stage, representing various music genres like rock, punk, folk and electronic.

The tensions between NK and US of last year drew attention from people abroad, including foreign artists and musicians who performed during the Zandari festival that was held in Seoul in October 2017. Mayor label companies expressed concerns whether going to Korea and have their artists perform during this festival.

During the same period, many event promoters visited DMZ, including Martin Elbourne, art director for big festival like Glastonbury in UK and Martin Goldschumidt, co-founder and managing director of UK independent record label Cooking Vinyl. The visit to the demilitarized zone at the border between North Korea and South Korea inspired Martin Elbourne to start this project, that far from being a commercial festival, would be dedicated to inspirare people in achieving peace and harmony through music.

The challenge was set: organise a music festival with international artists in a one of the most sensitive and fortified border region. Next step was to find sponsors for the festival. Fortunately the Seoul Mayor Park Won-soon, Gangwon province Governor Choi Moon-soon and the Culture Minister Do Jong-hwan agreed to fund the festival.

Many artists from all over the world showed their interest and support to the festival, one of the first being Glen Matlock, founder member of punk legend band Sex Pistols. Quickly the lineup for the festival was completed, with Korean and foreign artists willing to join this unique festival.

The festival kicked off with International conferences at the Seoul platform Changdong 61. Musicians, music industry executives and activists discussed on how music can inspire people and strategies for peace and unity through music.

We had the chance to join the festival on the 23rd and 24th of June. Only 140 passengers were able to board the Peace train from Seoul Station and the journey on the train was already part of the festival: we enjoyed performances by Korean band Galaxy Express and African Collective Koulè Can that made us company during the train ride. Moreover there also also speeches by professors, organisers of DMZ festival and Seoul Mayor. 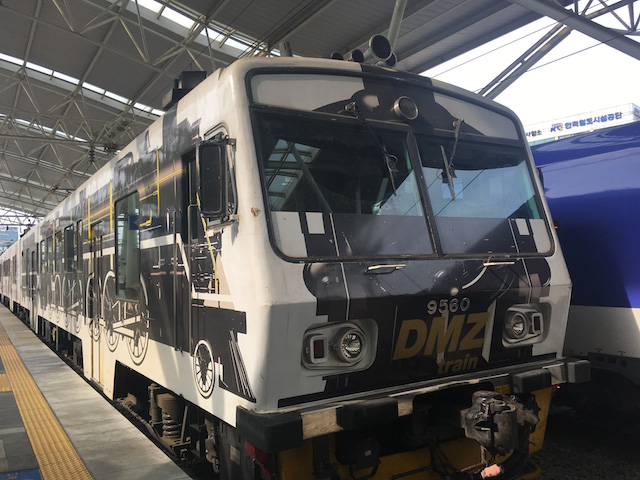 The itinerary would include two representative locations of DMZ: Nodongdangsa (노동당사) and Woljeongri station (월정리역). The first stop was Nodongdangsa , the ruins of the former headquarter of North Korean Labour Party. A place with a dark past (torture, detentions and questionings were the norm) that was destroyed during the Korean War. Here we gathered together to admire the dance performance from Collective A and listen to the music of Korean Singer-songwriter Sunwoo Jung-A.

After the concert the boarded the train again to the Woljengori station, whose building is located just less then 100 meters from North Korea territory. An historic location where is still present a wreckage of a train bombed during Korean war. This closed station has become over the years a place for artists to perform and exhibit their artwork. Here we enjoyed the concerts of Bahngbek, Kan San-ae and Newton Faulkner.

Our trip continued to the main location of the festival, the Cheorwon Facilities Management Office, formerly known as Iron Triangle Battlefield Hall – “Iron triangle Battlefield” was the name given to the area where heavy battle took place during the Korean war – and also very close to Goseogjeong, a natural landmark.

The program of the festival went on with performances alternating between two stages. There was a great atmosphere and many different people together enjoying themselves at the festival: people of different ages, who came there to celebrate peace and enjoying a great weekend of live music.  The lineup included many great bands of different genres. We enjoyed the exhibition of Ssing Ssing, a folk-glam Korean band, mixing Korean traditional singing with rock and electronics, Korean punk legends Crying Nut, Korean rock bands Jambinai, Kiha & Faces and Taiwanese indie rock band No Party for Cao Dong among others.

The highlight of the festival was the exhibition of Glen Matlock, who joined Crying nut and Cha Seung Woo, on the closing concert of the festival. They performed some classic Sex Pistols “God Save the Queen” and “Anarchy in the UK” – it was a strange feeling for me to see all these punk legends on stage and young people who were not even born dancing and singing together to the music. Amazing how such music can bring different people together from all over the world and celebrate peace at any latitude.

After their last songs, the organizers of the event joined the artists on stage and they all said goodbye to the audience to the 2019 edition of the festival.

There is hope for the future and  it would be great if in the coming years the festival will be organised in North Korea or having North Korean bands performing as well.