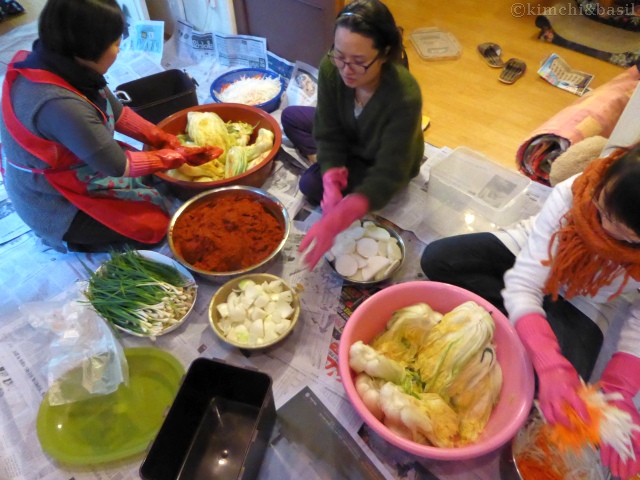 Probably one of the most interesting experiences you could do in Korea, is to join a Kimjang. The Kimjang consists of the preparation of big quantities of Kimchi, one of the  representative dishes of Korea. This preparation is often done with relatives, friends and neighbors and it is one of the most characteristic traditions of Korean cuisine (you can find a more detailed explanation here).

Kimchi is usually prepared before the winter, to have a stock of fresh vegetables throughout the cold season.

During the three months I was in Korea, I had the chance to join a Kimjang in the house of some friends in Busan. I want to share my experience and hopefully if you visit Korea, will have to chance to do it too.

Work started quite early, so after a quick breakfast we were ready to start. We collected all the vegetables (radish, Korean cabbages, spring onions and carrots) and wash them well to eliminate any dirt. Removed the brown and old leaves from the cabbages but keeping one of the outer green ones: this was needed to wrap the cabbage at the end of the preparation. Second step was to add salt to cabbages and the radishes and put them aside for a few hours to eliminate the excess of water and make the leaves softer. In the meantime we started to peel and slice the vegetables. The radishes were diced since we will make kkakdugi. 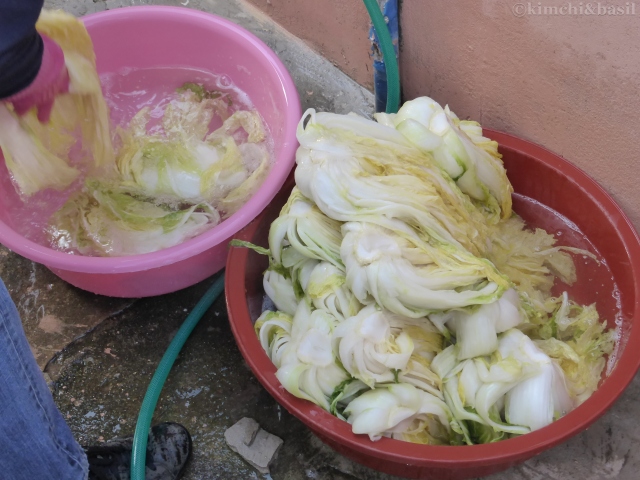 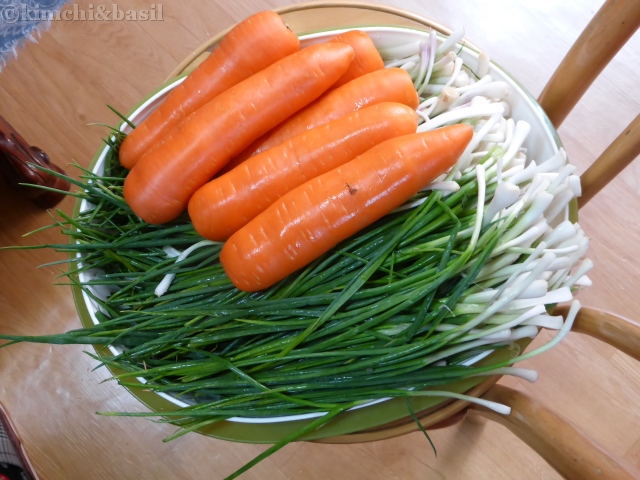 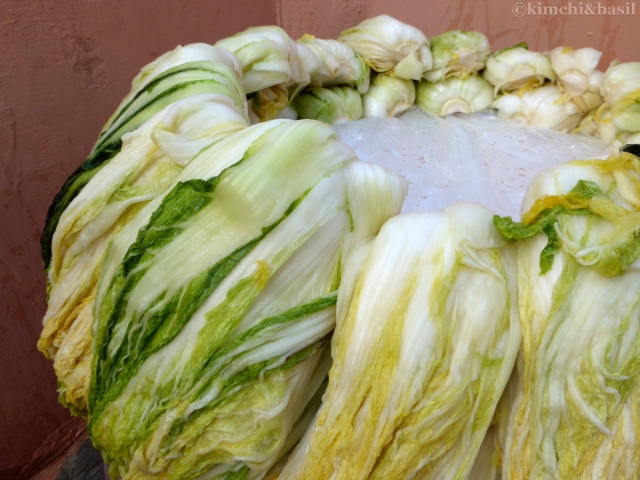 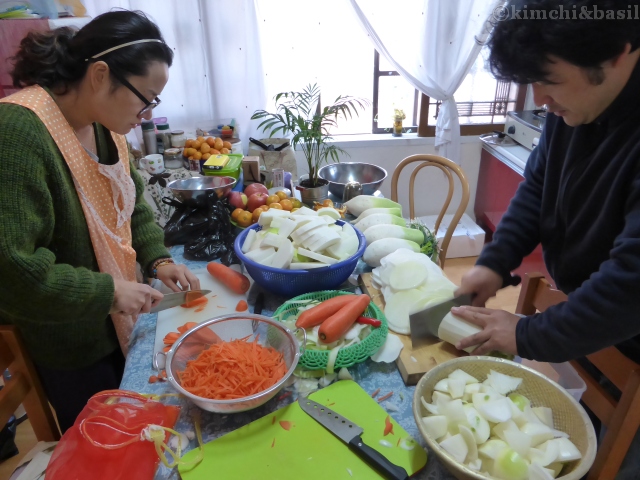 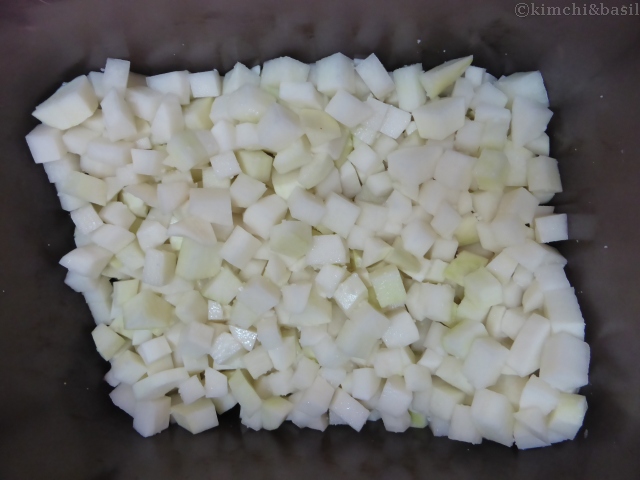 A crucial step is the preparation of the sauce that was used for the kimchi. This sauce was made by mixing water, rice flour, chili pepper flakes, fish sauce, crushed garlic, sliced onion and minced ginger. As you can see the sauce we made was bright red, so this can give you an idea on how the kimchi was spicy! We mixed everything by hand, and if you do it yourself, don’t forget to use gloves! 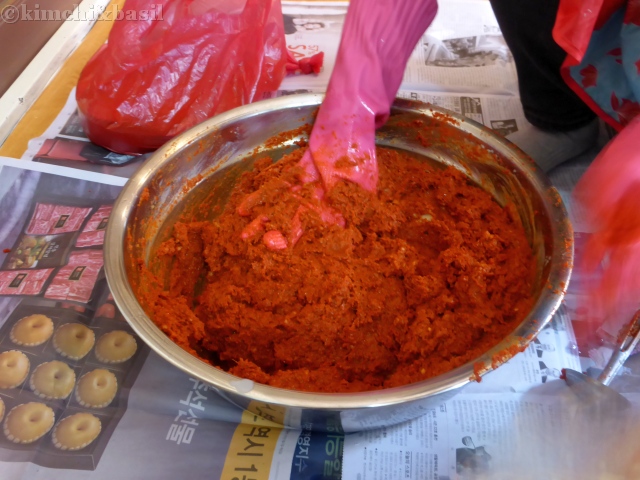 Next thing we did was to make some space in the living room, since we were going to need it! As you will see later, making kimjang, even if it’s small scale, requires some space!

It was lunch time already, so we had a quick one with rice and soup. After a nice coffee, my friends needed an afternoon nap. I usually don’t sleep in the afternoon, so I took the chance of this break for exploring a bit of the neighborhood.

My friends live in a residential area of the Dongnae neighborhood of Busan. This is one of the oldest neighborhoods of Busan, where important archaeological sites such as the ancient tombs of Bokcheon-dong are located. The house of my friends is at the bottom of an hill, so I decided to enjoy the sunny weather by walking towards the top of the hill, hoping the view would be worth. The streets were silent and the atmosphere around very quiet: it felt like everybody was taking a nap out were out to work. I met only a stray cat, as I start walking uphill.

On the top of the hill, I could have a view on the low houses with blue roofs and on the other side of the city, I could look at the skyscrapers of the city center.
I sat on a bench and relaxed there for a while, warming myself up at the sun, before going back to the kimchi-making! 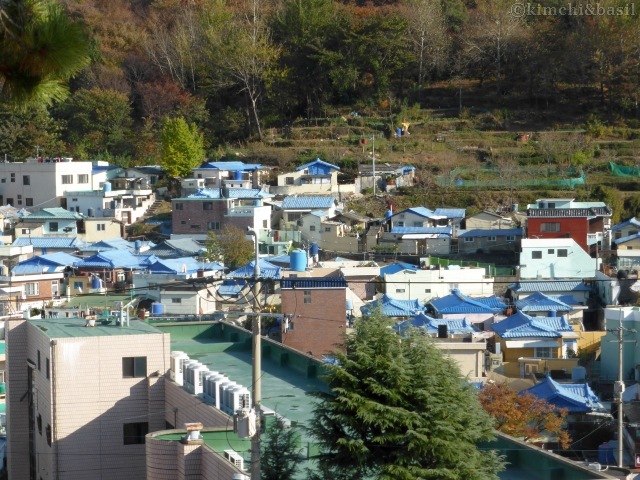 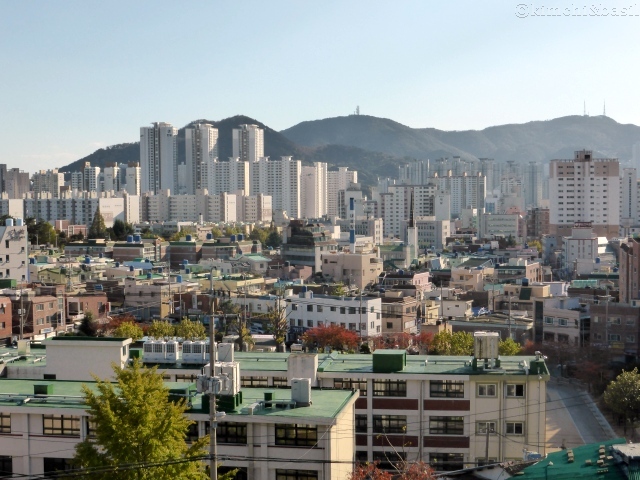 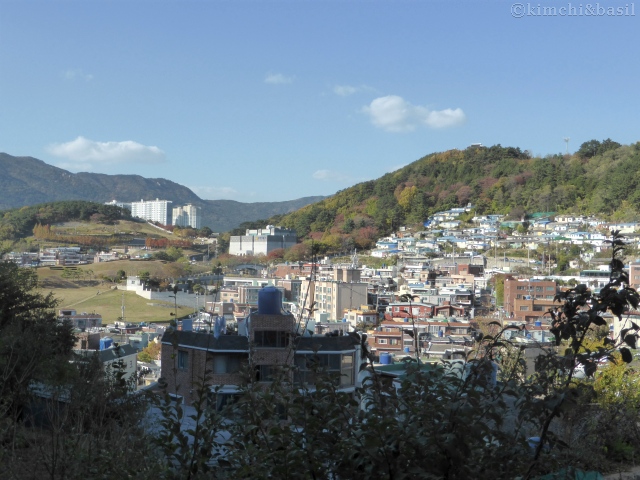 When I got back, after 1 hour, my friends were still sleeping, so I made coffee and played with the two cats of the house.
After a while, my friends woke up and we started working again. It was the moment to prepare some delicious kimchi! 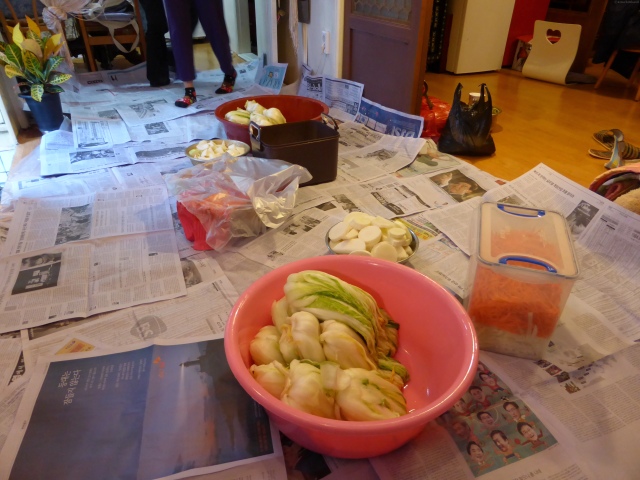 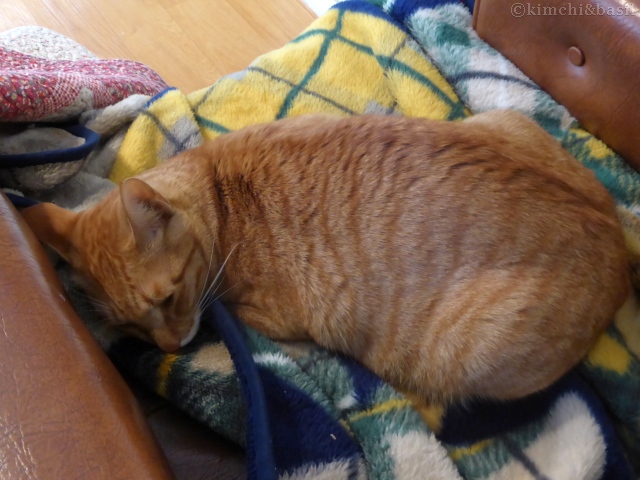 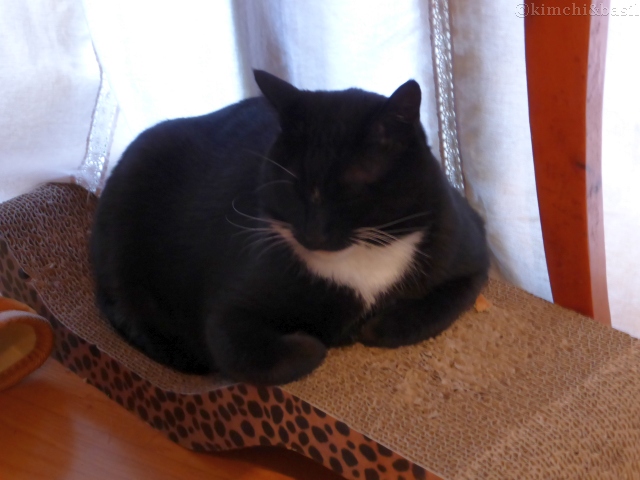 We covered the floor with newspapers and a plastic sheet, in order to keep the house clean, and started the next phase of the kimjang.
The cabbages are stuffed with the sauce between the each leaves, wrapped with the outer leaves and placed in a clean container that will be stored in the fridge. In the past cabbage kimchi was placed in earthenware pots, and then dig in the soil until the opening: in this way the temperature of the kimchi would be kept constant and ideal for the fermentation process, despite the cold winter temperature. A lot of people still uses those pots and you could easily see them on balconies or gardens of Korean houses.

My friends gave me good tips on how to proceed, so after a slow beginning and a more “mild approach” from my side – add more spicy sauce Vincenzo, more, more! – I was finally able to catch up with my friends on both cabbages and spiciness! 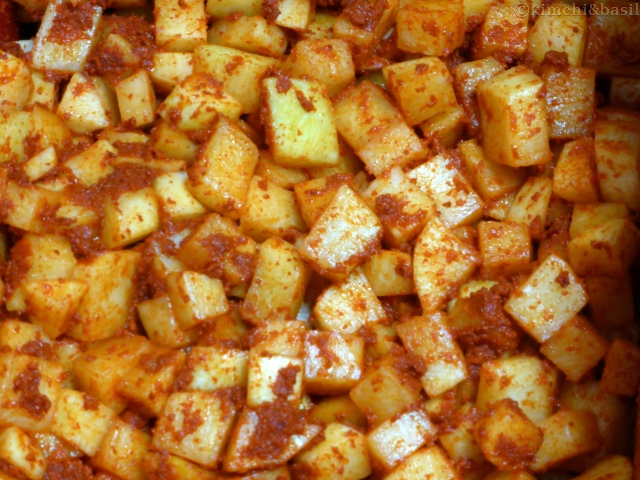 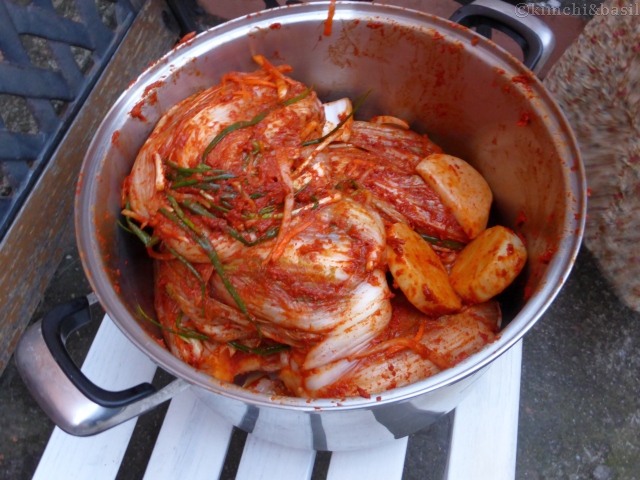 We had quite a lot of cabbages and radishes to prepare, so we managed to finish everything, including cleaning, in a bit less than four hours.

The kimchi prepared was divided among all of us, and I got my share of cabbage and radish kimchi to bring home and let my roommates in Seoul try it too.
It was time for dinner, and we were quite hungry after a long day of work. Japchae, soup, rice and delicious fresh kimchi!We had a cozy dinner and a nice chat while drinking beer. What else do you need after a long day of work? 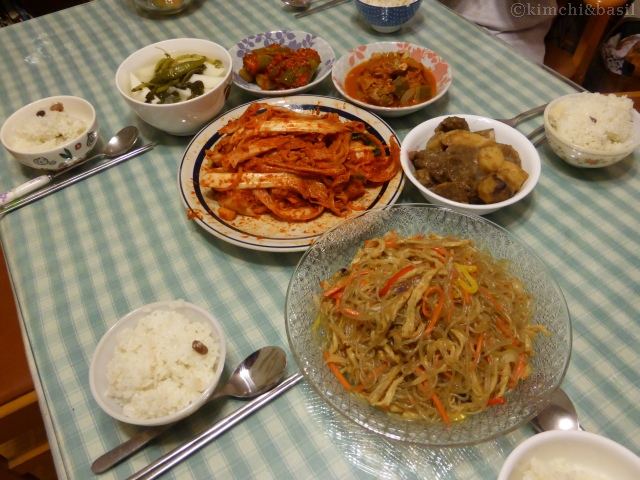 Overall I enjoyed this day very much: this sense of friendship and community, working all together on something, and share the results, is what kimjang is about I think. I feel very lucky of having the chance to share this experience with my great friends, and I really felt at home, even though I was very far away from it.

Night came soon, and after greeted some of friends who went back to their home, it was time to get some sleep. I fell asleep almost immediately with a filled tummy and a smile on my face.