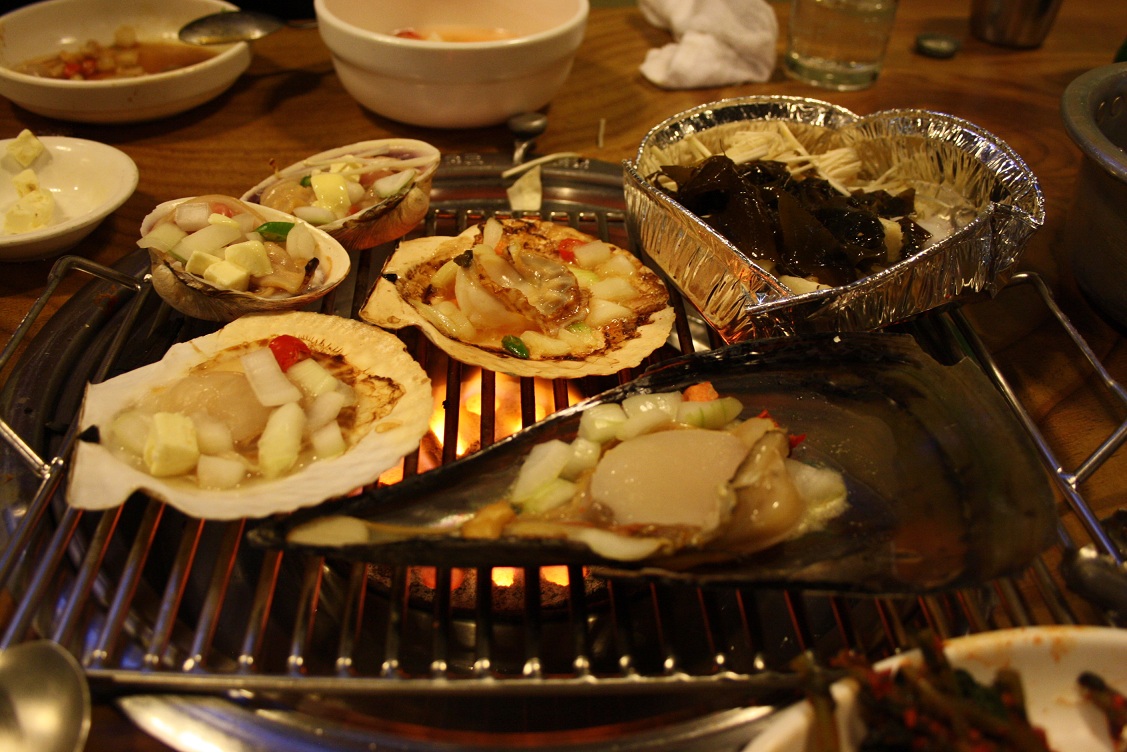 while we were in Busan we had a dinner in a bbq restaurant on the sea side of Haeundae. Our destination was a famous restaurant (Suminine) suggested by one of our friends (Thank you Yoonhee!) but the place was so crowded and our waiting time more than 45 minutes that we decided to head to another restaurant in the same area. Although we were  a bit disappointed for not being able to eat in Sumine the dinner we had in the other restaurant made our sadness fade away quickly!!

The restaurant we went to is in a lovely location next to the seaside and has traditional seating place (you seat on the ground!) and in the center of the table there was a charcoal grill for the barbeque. We ordered a mixed grill of eel and seashells and waited with impatience!

The service though was quick and we started being served with a mix sea shells (abalone and others), an octopus with enoki mushrooms in a disposable aluminium pan (that will be cooked on the grill) and several  side dishes.

The side dishes included:

We started cooking shrimps on the grill since it is quite straight forward but we were not very familiar with having seashells on the grill so fortunately one of the waitresses was so nice to explain how to properly cook them. She explained us that we had to put butter on the seashell and place them over the grill. The butter would melt and the seashell would release its fluid. After cooking both side of the mollusk for about 10 minutes this was ready for being eaten! The sauce contained in the seashell (mollusk fluid + melted butter) can be added to the pan containing octopus and mushrooms that were slowly cooking on the grill. You can also add some mollusks to it!

After all the seashells have been emptied we had to cover the aluminum pan with them in order to create a seashell-lid that will make the steam cook the octopus and mushrooms. We didn’t have a clue that we needed to do that, in fact our octopus was not cooking at all but the waitress helped us out again! After cooking, the octopus was cut in pieces and enjoyed together with mushrooms, spicy pepper sauce or dipped in one of the sauces.

Next came the eel! we were served with a big plate of eel cut in small pieces and a plate with cabbage and sesame leaves for the wrapping.

The eel cooked very fast and we enjoyed it with spicy sauce and wrapped in the vegetables leaves!

That was a great dinner and we left the restaurant very full and it was definitely one of the most delicious and funny dinner I have ever had (the struggling with scissors, chopstick, seashell and not-cooking octopus was hilarious for us and for the restaurant staff!)

Another funny thing about this restaurant: at the end of the dinner you will be given a seashell where you write your message and stick it on the wall (see pictures!).